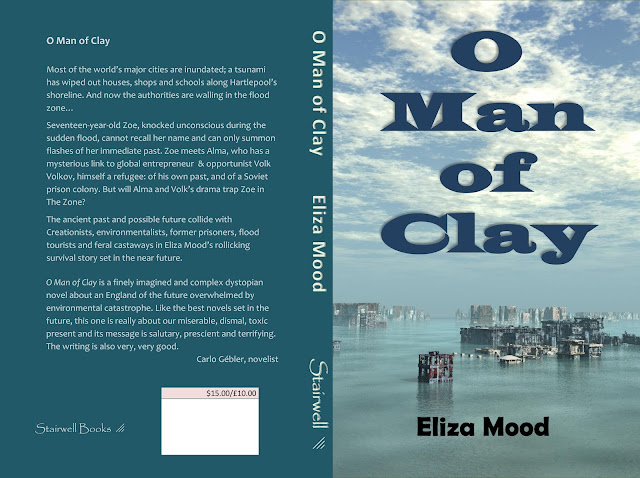 In a fable about climate change, most of the world’s major cities have been inundated, with a tsunami wiping out the houses, shops and schools along the Hartlepool shore. Seventeen-year-old Zoe, knocked unconscious during the flood, cannot recall her name and can only summon flashes of her immediate past. She meets Alma, who has a mysterious link to global entrepreneur and opportunist Volk Volkov, himself a refugee: of his own past, and of a Soviet prison camp. The story, set over only a handful of days, flashes between Volk and Alma’s past and the near-future present. The ancient past and possible future collide with Creationists, environmentalists, former prisoners, flood tourists and feral castaways in a rollicking survival story set in the near future.

Carlo Gébler author of The Innocent of Falkland Road and a new version of Aesop’s Fables (with Gavin Weston) said:
'O Man of Clay is finely imagined and complex dystopian novel about an England of the future overwhelmed by environmental catastrophe. Like the best novels set in the future, this one is really about our miserable, dismal, toxic present and its message is salutary, prescient and terrifying. The writing is also very, very good.'

This is the story of Clem, a man struggling to re-establish his identity after serving in the Ambulance Corps as a conscientious objector during the Second World War. Clem faces his demons by spending increasing amounts of time in out of body flights. There he explores issues of identity, betrayal and loss through the innovative use of traditional tales, which assist him to articulate and make sense of otherwise unspoken fragments from his past. Meanwhile, in his daily life as a teacher in post war Britain, his relationship with Lou is developing.
Eliza Mood Page Amazon

1.)  What am I working on now?
Since finishing ‘O man of Clay,’ my just published cli-fi novel, I’ve been working on and recently finished a historical novel set in Wormwood Scrubs prison in London in 1948 (unpublished). It looks at the hubris of the British Empire in thinking it could resettle people in the ‘vacant’ spaces of the earth and some consequences of this attitude. ‘The Scrubs Gala’ is about mind control, the coercion that separates a person from his own nature, to make him conform. Though not a cli-fi book, I think it is part of a similar attempt to see what causes human beings to become self-destructive or to lose their power as a force for good.
The book I am currently playing about with at an early stage is cli-fi; while ‘O Man of Clay’ is set in the near future, this is set in 2050 and imagines we have failed to meet the UN targets of net zero emissions and no more than 1.5 degrees of global warming. The main characters are among a group of displaced people whose lands are becoming increasingly uninhabitable. Governments are making the wrong decisions so they take things into their own hands. While collecting samples of remaining species, human artifacts and writings for a new museum of earth studies, they discover a matriarchal group of human beings who have been entirely overlooked and whose society may seem from the outside to be without structure. They respond in the moment with no institution or law and are entirely unaware of and untouched by the circumstances that are afflicting the rest of the world. Everything is decided by means of a kind of theatre; acting out a series of solutions and then making a collective decision about what is best. The question is whether these people might contribute to salvaging anything and halting the destruction.

2.)  How does my work fit into the Cli-Fi Genre?
My recent work is in the tradition of near future speculation or present world dystopias or cli-fi that attempts to look at what we are now. It offers no solutions but represents competing voices and asks readers to think. In ‘O Man of Clay’ I try to show that our failure to prevent climate change may be partly rooted in a psychological need to believe that we will be saved; that someone will make a great sacrifice for us; or that external forces are at work in the universe that intended this to happen and therefore no intervention is necessary or possible. Whether these beliefs are religious or cynical political manoeuvres or rationalisations of a deep desire for a leader who will tell us what we want to hear, they may validate the need to treat someone as though they are worthless because they do not hold the same belief.
I am interested in mess and muddle and the humour and laughter that makes us human and can possibly open people to change. It may be disorganised on the fringes of things but these are places where change  may arise. My first novel, ‘Giving up Architecture’ set just after the second world war was a love story involving two people affected (one traumatised) by war in ways that might unravel through their lives to come. The reader saw what they did not see about each other: how they had been formed by their youth being lived in the anxiety of war but also how they might muddle through.

3.)  Why do I write what I do?
I have always been interested in language and the rhythms and sounds of speech and how this is replicated in writing. My mother spoke to me all the time as a very young child. One of my first words was ‘powder’ which I would scatter for the excuse to say the word with a long first syllable and a heavy beat on the second.
A seminal ‘writing’ experience for me involved a consciousness of self in the universe. At the age of about six I was lying in the dark in the back of my family’s fiat station wagon where my brother and I were to sleep for a long journey. There was little light pollution in parts of Northern England then and I saw millions of stars seeming to move towards me, some of them so close I felt I could reach out and touch them. I was overwhelmed and felt myself to be a spec among them. It was an almost ecstatic feeling.
I am very interested in oral storytelling and the way that all good tellers, young children and older people in earlier stages of dementia included, must get to the end of their story, must not be stopped and or the form will be violated. I researched children telling in the classroom and found them adept at constructing narration on the hoof and that being encouraged to tell had an impact on their written language skills and confidence with language.
In literary terms I have for a long time been interested in early utopias, satirical or otherwise and their closeness to dystopias. Connected with this, early travel literature, both reports of colonial journeys to settle and fictional travels are a fascination. I am interested in the way they reflect on who we are. There are several journey tales in ‘O Man of Clay,’ whether short or long, spiritual, biological or geographical.
I didn’t set out to write cli-fi. I started out with an idea about a character who inadvertently re-enacts an ancient ritual on the shore of a country involving the elements of creation and re-creation myths—the materials of clay, the making of a figure—and does so in the course of trying to come to terms with the violence in her life. This leads to a recreation of herself. It emerged that this character’s experience and that of the others in the book was deeply connected to what is happening to the earth: not in a mystical way, but in a very real violent and catastrophic way.

4.)  How does my writing process work? Explain your writing days and nights. How do you work? How do you outline or plan the story?
I don’t plan on paper initially. I have an idea and walk through woods and over hills to mull it. Then I start writing what a character is perceiving and thinking as he or she goes about her daily life and I move the character through landscapes I think would work for this idea. At this stage my writing is exploratory for me as well as the character. I’m interested in the relationship between the narrator and character, how the narrator needs to stand back and let the character get on with it, while also having their own consciousness. At some stage I will sketch out some plans (spiders/ mind maps/ linear/ chapters). When I have some sense of shape and am ready to write chapters I do so without stopping for grammar, spelling or any other correction. I need to feel a rhythm, as though someone is telling the story in the rhythms of spoken language.
When I have written a full draft in this way, I get to the technical part and may manipulate closeness and distance of the narrator to the character’s perceptions through grammar - tense and person. I draft and redraft many times.  Finally, I read my draft aloud to check that I have not lost the rhythm I first heard in my head.
Email ThisBlogThis!Share to TwitterShare to FacebookShare to Pinterest